Skip to Main Content
It looks like you're using Internet Explorer 11 or older. This website works best with modern browsers such as the latest versions of Chrome, Firefox, Safari, and Edge. If you continue with this browser, you may see unexpected results.

Pursuant to their enabling statutes, Pennsylvania agencies have the authority to promulgate, amend, and repeal regulations. A brief, generalized summary of the regulatory rulemaking process is below. For more detailed information, see the Independent Regulatory Review Commission's guide to The Regulatory Review Process in Pennsylvania or the Pennsylvania Bar Institute's guide to Creating, Influencing and Challenging a Regulation.

First, an agency with rulemaking authority determines that it wants to adopt, amend, or repeal a regulation, and drafts proposed language.

Second, the agency must submit its proposed regulation to the Office of General Counsel and Office of Attorney General, each of which conducts an independent review as to form and legality.

Third, assuming that no objections arise during the legal review phase, a notice of the proposed regulation is published in the Pennsylvania Bulletin. This notice must include:

At the same time that the agency submits its notice for publication, it also submits a copy of the regulation and a Regulatory Analysis Form ("RAF") to the Independent Regulatory Review Commission ("IRRC"). The RAF contains information on the justification, benefits, and risks of the proposed regulation, including comparisons to federal and other state standards, descriptions of alternatives which were considered and rejected, and more. The RAF is not published in the Pennsylvania Bulletin but is available on the IRRC website (find the regulation you are looking for, and click on the 'download proposed regulation' link).

Fourth, following publication in the Pennsylvania Bulletin, there is a public comment period of at least 30 days. During this time period, any interested person is encourage to file comments with the agency, the IIRC, and any relevant committees of the General Assembly. The IRRC also conducts independent outreach to notify groups and individuals who may be impacted by a proposed regulation.

Fifth, within 30 days of the close of the public comment period, the IRRC must submit its comments, recommendations, and objections to the proposed regulation. The IRRC has a specific set of criteria that it applies, including determinations of whether the regulation is within the agency's statutory authority, whether it is consistent with legislative intent, and whether it is in the public interest. These comments are published in the Pennsylvania Bulletin.

Eighth, assuming that the IRRC and committee approve the regulation, the agency submits the regulation to the Attorney General for a final review.

Finally, upon the Attorney General's approval, the regulation is published in the Pennsylvania Bulletin. The regulation becomes effective on the date of publication (or on a later date specified by the agency).

The Pennsylvania regulatory process is governed by four statutes: 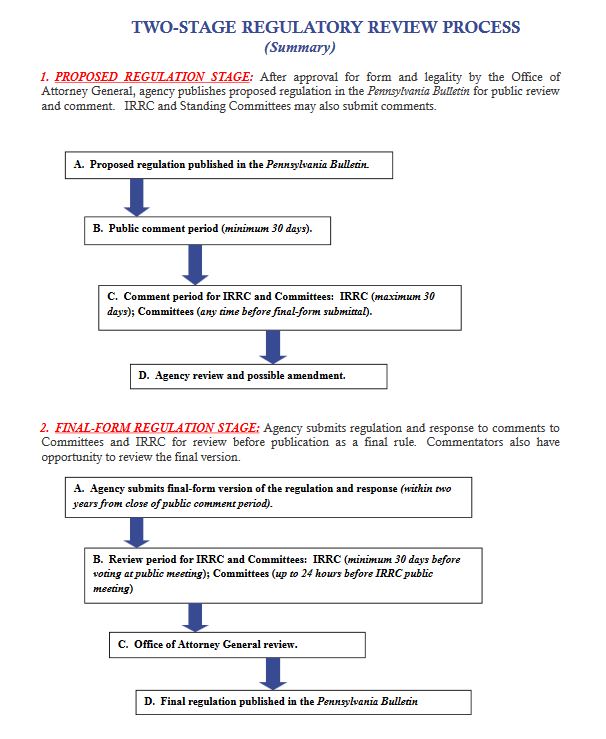 Every year the IRRC must publish a report on the previous year's regulatory activity, including summaries of all proposed and finalized regulations. These annual reports are available on the IRRC website.